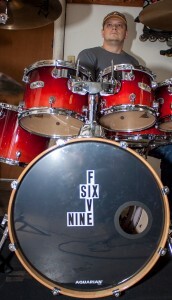 Bill has been banging on shit with style since 1988. It was an inevitability; jamming is in his blood. His uncle is Charlie Hayward, the bass player for the Charlie Daniels Band.

Bill provides the pulse and the drive for 6ix 5ive 9ine’s heavy-handed interpretations of rock classics. Early on in his drumming career, he was influenced e by a wide variety of musicians, including Matt Sorum, Steven Adler, Chad Smith, Tommy Lee, Jack Gavin, and Alex Van Halen. His wide array of influences has helped him develop a unique style blend of straight up rock with a sprinkling of some country and funk grooves.

In the past, Bill has provided the kit-work for the local band Mire during the recording of their first CD, Lazlo, and 8 Ball Chaos.