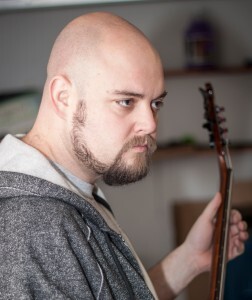 Tim has been immersed in music since leaving the womb (some would say before that). Growing up listening to his parents records (everything from Neil Diamond, Chicago, and Queen to the Eagles, Beatles, and Three Dog Night) his love for music budded early and blossomed into what is now considered by many to be an obsession. But ever since he was able to own his first cassette (that being Quiet Riot’s Metal Heath), ROCK has been the go to ear candy of choice. Over the years, he has been involved in many musical projects from learning various instruments including saxophone, tuba, bass guitar, kazoo and triangle; to marching bands, and bell choirs; to pseudo-classic neo-progressive punk outfits, classic metal bands, and a brief stint as the marimba player in Menudo (he was subsequently removed from the band for unknown reasons). But for everything he lacks in talent as a bass player and musician, he makes up for in charm, sarcasm, and his ability to make everyone in the room feel uncomfortable. Playing with Bill and Dave has been an off and on thing since the mid-90s but finally adding in Jessica’s vocals to the complete package makes 659 the most talent he has been around in his brief tenure on planet earth, and he is very grateful for the opportunity. Tim currently pounds on an Epiphone Thunderbird IV Bass Guitar using both Behringer & Ampeg Amplification (but brand loyalty can be bought!!).