As of this month, it has been 2 years since 6ix 5ive 9ine formed and settled on a name. 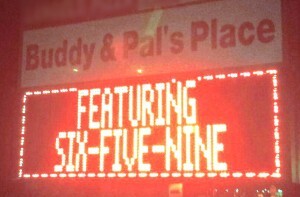 October 2014 marks the first time we’ve seen our name up in lights! (remarkably with no spelling errors, incorrect abbreviations or mispronunciations!) This picture was taken in front of Buddy and Pal’s in Schererville. We’re playing there on October 24th along with Dreamz and Satalyte Gypsies.

Finally after 23 years, Dave managed to learn a second song! (he forgot it 15 minutes later, however)

Before the end of this month, 3 of the 4 members of 6ix 5ive 9ine will have wedding anniversaries in October.

Lots of good stuff happened and still happening in the 10th month: 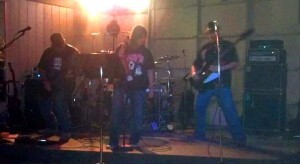 Thanks to all who came out to Sportsman’s Inn in South Haven on October 4th, and thanks to Orchestrated Chaos for letting us jam for the opening set! We had a blast and we hope to see you all there again. ( …except that one guy who decided to rearrange the chairs. He can stay home.)

Ladies Rock Night is happening on October 24th. The night is packed with 3 kick-ass rock bands each sporting a kick-ass female vocalist. We’re all getting together to raise money for breast cancer awareness. There is no charge to get in, but there will be a donation box at the event and we encourage everyone to pitch in a few bucks.

COME OUT, ROCK ON
AND HELP SAVE THE Ta Ta’s!